Posted on February 4, 2013 By ThruJimsEyes 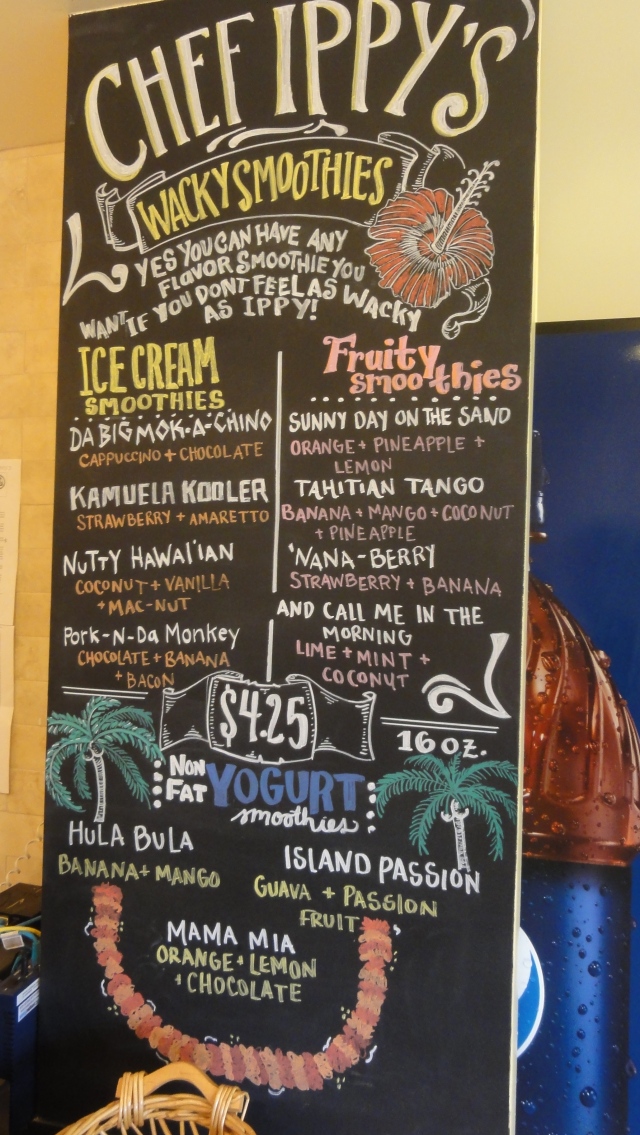 Aloha. Today I am excited to share with you the long awaited opening of Ippy Aiona’s new restaurant, Ippy’s Hawaiian Barbeque, at the Queen Shops in Waikoloa Beach, Hawaii. Ippy Aiona is the son of Max and Robin Aiona, owners of Solimene’s Italian Restaurant in Waimea, the Island of Hawaii. Ippy made it to the center of the U.S. culinary radar when he had great success on the Food Network Star Season 8 show in 2012. When the rumors of Ippy’s possible restaurant became fact, locals went crazy.

I was a little hungry today so I chose the Hawaiian Plate… with the carrot cake… and Pork-N-Da-Monkey ice cream smoothie… and an iced tea.

The Hawaiian Plate is Kalua Pig, Teriyaki Beef, and Lomi Lomi Salmon. First off I have to say the servings are quite generous, like luau size!! The Kalua Pig is onolicious. It is shredded slow cooked pork with the perfect saltiness and melt in you mouth texture. The juices are tantalizing my tongue. The Teriyaki Beef is a sweet teriyaki sauce topped with chives. The texture contrasts the pork with a bit more heartiness. The flavor makes your mouth water. Man this is good. The Lomi Lomi Salmon is a Hawaiian fresh tomato and salmon salad.  It is a mix of raw salted, diced salmon with tomatoes, sweet gentle Maui onions (or sometimes green onion), and occasionally flakes of hot red chili pepper. Keeping with tradition, it is served cold. The Lomi Lomi is similar to a salsa in texture. It is very tasty and well balanced. Traditionally served at luaus it the perfect compliment to the Kalua Pig and Teriyaki Beef. To fill you up the rest of the way they have thrown in 2 large scoops of plain white rice and some Mac salad.

The carrot cake has great texture and I love all the flavors. The myriad flavors of raisin, carrot, cinnamon, nutmeg, and walnut dance on your palette like a finely choreographed broadway show. It’s only short coming is that it is a little dry, but the coconut frosting more than makes up for it.

The Pork-N-Da-Monkey ice cream smoothie is off the charts good!!!  It is a chocolate, banana, bacon smoothie. The flavors are an amazing surprise of salty bacon wrapped by a thick blanket of chocolaty joy and love with the banana thrown in for good measure. It was so good I went back for a second.

Ippy’s Hawaiian Barbeque receives a 4.5 surfboards for flavor, texture, and over all food quality (the shake receives 6 surfboards). The ambience is a 2.5 because it’s in a noisy food court, although on beautiful days you can sit outside in the Queens courtyard. Overall I still give Ippy’s a great recommendation. We will be back!!!

Truth.
Nature is not hurried yet everything is accomplished. ~ Lao Tzo -This quote popped up upon finishing a quick meditation before a market. I was meditating to help me shift from hurried set up mode and easily transition into relaxed sales mode. Thank you Oak. I love your app.
It’s nice to know there are still quite places on the planet.
Waimea Hawai’i gas prices. What are you paying per gallon and which city did you buy gas?
Kai restaurant in Kailua-Kona for Kenya’s birthday. Good food. Great setting on the ocean. We will be back.
Happy Birthday Kenya. Loved hanging out in the boat for a morning of snorkeling, good food, great friends, and sailing in the sun. Mahalo my friend.
With over 155 state, national, and intl culinary awards we might be something right. Come sample Akaka Falls Farm Jams, Butters, Marmalades, honey, and more at Food Truck Friday at our new location. Beginning March 18 we will start at Tony Honda on 75-5608 Kuakini Hwy, Kailua Kona, Hawai’i. Come hungry and bring your friends.
We just had one of our “must recommend” experiences!! Voltaire and Norman at Kona Cloud Forest Sanctuary are wonderful. We went to see a couple of friends who said come by and we can take a hike in the jungle. I thought Voltaire was joking. OMG, thank G he wasn’t. Their property is a sanctuary. Norman knows everything about the plants and more. Voltaire is always a loving bright spark to light up your day and explained a lot about the history of the land. We enjoyed a great little informative hike and meditation. They accepted our offer to come back and do some voluntary trail building and clean up needed after the recent hurricane. We will be back!!! Do this tour.
Due to a massive fire last year between Kamuela and Saddle Road, the rains today brought massive runoff and with that came the worst conditions I’ve ever seen on the upper road (Hawai’i Belt Road -190) through that area. The road was closed at the turnoff to Waiki’i Ranch. I guess my business meeting in Waimea wasn’t that important today. LOL 😂.—— Kudos to Hawai’i Island Department of Transportation!!! They repaired the road and made adjustments for possible future weather events. Mahalo.
Hapuna Beach Sunset finished with a bright promise for the next day.
Sunset at Hapuna 1/2/22
This is our first time back to The Coffee Shack since CoVid started. We are both so grateful for this little breakfast/lunch shack on the side of the hill. Good food. Good coffee. A bit voggy today but always a great panoramic view. I enjoyed local caught Ono Benedict today with potatoes. My wife enjoyed the Eggs Benedict and we split one of there memorable cinnamon rolls. See you at The Shack!!
Just finished a wonderful meal from Hale I’a Da Fish House. I enjoyed the ahi bento plate and 2 marlin poke bombs. Bento I went spicy sauce. Poke bombs I chose their recommendation of a mix of 2 sauces. Bento plate gave me a choice of brown rice or white. I’ve learned out here to rarely order something white. Great choices all around. The fish wasn’t just fresh, it was melt in your mouth fresh. I will definitely be back.
At least Island Lava Java Bistro, 1 of our favorite restaurants for breakfast, is still open. I get the same thing each time: Big Kahuna Plate. It’s catch of the day fish, 2 eggs, with cubes deep fried potatoes and fresh fruit. Yum!! Yesterday the fish was pan seared Ahi or Ono. I had the Ono. And it was onolicious!! Oh yeah... and of course a whole pot of coffee. They now serve a 32oz French Press of Kona Coffee.
2nd corse: Spicy Puna Cheese Steak is a very well balanced Philly Cheese Steak with pepper cheese and jalapeño peppers. Spice level is not mild. It has a little heft to it. Toasted to perfection bun. It’s looks small but is quite filling. I recommend it and will order it again.
What a way to set the stage for a great experience for my first time at Poi Dog Deli in Kailua Kona across from where Safeway used to be. 1st course: popcorn and Peanut Butter Milk Stout Nitro while I wait 20 minutes for my sandwich. There is plenty to look at on the walls to keep a person from getting bored during the wait. The beer is quite lovely. It’s smooth with a great nutty flavor. Flip the bottle upside down, set it in the glass, slowly pull the Boyle from the glass to create a foamy head. Check next post for the sandwich 2nd course.
Give a shout-out to @makana2020 for earning an International Flavor Award for his creation: Poi Coconut Butter. Poi is a superfood, locally sourced from Waipio Valley on The Big Island called Hawai’i. With the coconut butter it taste a bit like tapioca but with a superfood kick which will leave you feeling strong. Mahalo to you Makana. 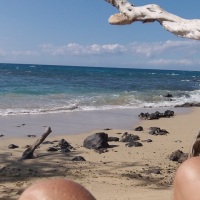 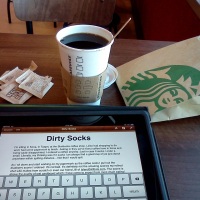 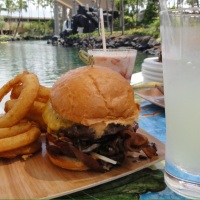 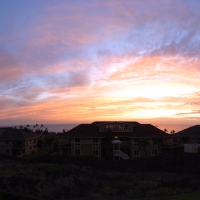 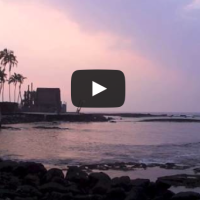 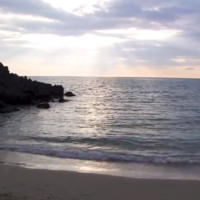